I’m going to try and plan out my TBR again and see if it works out. If not, I’ll go back to just reading what I what instead..

*Please note that two of my books are sequels so read the descriptions at your own risk if you have not read the first books in the series.* 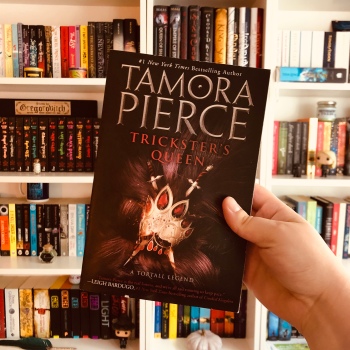 No longer a slave, Alanna’s daughter is now spying as part of an underground rebellion against the colonial rulers of the Copper Isles. The people in the rebellion believe that a prophecy in which a new queen will rise up to take the throne is about to be realized.

Aly is busy keeping the potential teenage queen and her younger siblings safe, while also keeping her in the dark about her future. But Aly, who is usually adept at anticipating danger and changes, is in for a few nasty surprises.

No more re-reads for now. Instead I thought it was about time to finish a series, well duology, that has been waiting long enough.

Smoke in the Sun
by Renée Ahdieh

Sequel to Flame in the Mist

For weeks, seventeen-year-old Mariko pretended to be a boy to infiltrate the notorious Black Clan and bring her would-be murderer to justice. She didn’t expect to find a place for herself among the group of fighters—a life of usefulness—and she certainly didn’t expect to fall in love. Now she heads to the imperial castle to resume a life she never wanted to save the boy she loves.

Ōkami has been captured, and his execution is a certainty. Mariko will do what she must to ensure his survival—even marry the sovereign’s brother, saying goodbye to a life with Ōkami forever.

As Mariko settles into her days at court—making both friends and enemies—and attempting Ōkami’s rescue at night, the secrets of the royal court begin to unravel as competing agendas collide. One arrow sets into motion a series of deadly events even the most powerful magic cannot contain. Mariko and Ōkami risk everything to right past wrongs and restore the honor of a kingdom thrown into chaos by a sudden war, hoping against hope that when the dust settles, they will find a way to be together.

Then I thought it was about time to get back to some cozy romance. I got this book at a used bookstore.

The Little Teashop of Lost and Found
by Trisha Ashley 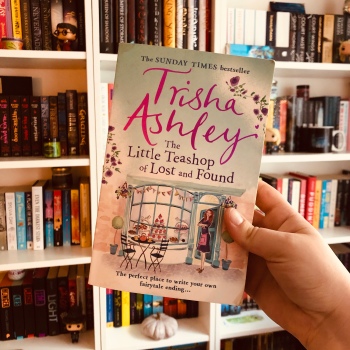 Alice Rose is a foundling, discovered on the Yorkshire moors above Haworth as a baby. Adopted but then later rejected again by a horrid step-mother, Alice struggles to find a place where she belongs. Only baking – the scent of cinnamon and citrus and the feel of butter and flour between her fingers – brings a comforting sense of home.

So it seems natural that when she finally decides to return to Haworth, Alice turns to baking again, taking over a run-down little teashop and working to set up an afternoon tea emporium.

Luckily she soon makes friends, including a Grecian god-like neighbour, who help her both set up home and try to solve the mystery of who she is. There are one or two last twists in the dark fairytale of Alice’s life to come . . . but can she find her happily ever after?

A thrilling series you want to continue? 📚
Book review/Boganmeldelse 📚🇩🇰
Boganmeldelse
Welcome to another #shelfiesunday
What are some underrated books you think deserve more attention?
What to read next? 🤔📚