In the Hand of the Goddess

I will try and keep this review as spoilerfree as possible, so to avoid potential spoilers, I suggest you just go ahead and read the books and then come back..

From now on I’m Alan of Trebond, the younger twin. I’ll be a knight.

And so young Alanna of Trebond begins the journey to knighthood. Though a girl, Alanna has always craved the adventure and daring allowed only for boys; her twin brother, Thom, yearns to learn the art of magic. So one day they decide to switch places: Thom heads for the convent to learn magic; Alanna, pretending to be a boy, is on her way to the castle of King Roald to begin her training as a page.

But the road to knighthood is not an easy one. As Alanna masters the skills necessary for battle, she must also learn to control her heart and to discern her enemies from her allies.

Filled with swords and sorcery, adventure and intrigue, good and evil, Alanna’s first adventure begins – one that will lead to the fulfillment of her dreams and the magical destiny that will make her a legend in her land.
(Goodreads)

I decided just to make one post for all the books and make it a more general review of them all instead of making 4 individual reviews because I’d be afraid that they’d be far too short. I will, however, split up the remaining series into individual reviews and perhaps I will split this one as well one day, but for now you’ll get the combined package.

These books have such a special place in my heart and despite being flawed, they remain among my favourite fantasy series of all time. In fact, in my Top Ten Fantasy Worlds the realm of Tortall scored a pretty high spot (I won’t say what it is, but check out the post and see for your self).

Tortall is a kingdom full of knights, magic and everything in between and we get to experience everything from sword fighting to first loves and all the joys of growing up.

The books are definitely more middle-grade, so the reading level is easy and the books are fairly short, but I honestly do not mind because I love that they are easy to read through, especially when doing an entire re-read of the 14 books in the “original” line-up. I have previously read the first book, Alanna: The First Adventure in just a few hours. It’s that easy to get through. But you can also feel Pierce’s growth as a writer as you get to the books in the other series, which just improves the overall experience. 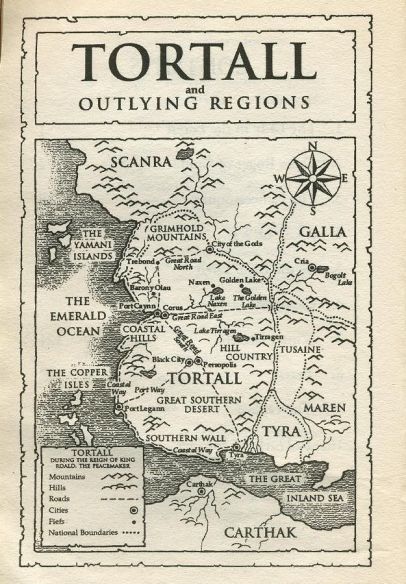 I immerse myself in this world and I marvel at Tamora Pierce’s creativity and attention to detail, particularly when it comes to clothing, weapons and fighting techniques. She has really done her research and made it believable and visually imaginable. It is also interesting how she draws inspiration from our world, geographical wise like the blond, blue-eyed people from Scanra in the north for instance.

I adore Alanna of Trebond as a character and a role-model. She fights for what she believes in and does her best to not let her size or gender get in the way of what she wants. There’s definitely more romance involved than with Pierce’s other female MC’s, but Alanna is a character who wants it all and she makes it happen and finds a way to balance it all.

Throughout these 4 books we get to see her grow up from a 10 year-old girl to a young woman with all the trials and tribulations that comes with it. First loves, body changes, hormones. It’s all there and it’s fun to see how Alanna, who is trying to suppress her womanhood whilst training as a knight, deals with these things.

My favorite characters in this quartet, besides Alanna, is George, Myles and Faithful. But so many other characters are worth mentioning; Prince Jonathan, Coram, Raoul and Gareth and so on. It’s a great cast who are believable and realistic and whom you wish you could spend more time with and get to know in real life.

My favourite book in the series is probably book 4, Lioness Rampant, but book two, In the Hands of the Goddess is also amazing, but they are vastly different in terms of ItHotG is still on the shorter side, but covers the last 4 years of Alanna’s knight training, whereas Lioness Rampant covers less than a year, so it is much less rushed with more details.

My least favourite of the 4 books (sadly, they cannot all be equally amazing) has to be Woman Who Rides Like a Man (which is apparently the general consensus). The different setting and lack of action really sets back the storyline and I sometimes just flip through the pages, knowing I’m not really missing anything exciting. It sucks that you can’t always like all the books in a series and that more often than not, there’s one book that sticks out from the rest that just doesn’t grip you like the rest of the series.

I want it to be known that it’s not all praise and cheers for these books. They have flaws, some more than other, particularly concerning the whole white-savior aspects that occurs in some of the books, but please do not let it ruin all the other amazing things about these books and this realm. No book is perfect and they are over 30 years old already.

So if you are a fan of classic fantasy and have not yet tried Pierce’s fantasy realm, then I highly recommend you picking up these books and give it a go.

Are you a Tortall fan? Got a favourite series or favourite heroine?

4 thoughts on “Review – Song of the Lioness quartet”

A thrilling series you want to continue? 📚
Book review/Boganmeldelse 📚🇩🇰
Boganmeldelse
Welcome to another #shelfiesunday
What are some underrated books you think deserve more attention?
What to read next? 🤔📚