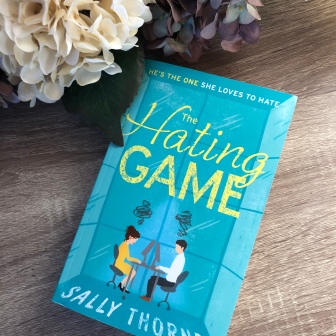 Nemesis (n.)
1) An opponent or rival whom a person cannot best or overcome.

Lucy Hutton and Joshua Templeman hate each other. Not dislike. Not begrudgingly tolerate. Hate. And they have no problem displaying their feelings through a series of ritualistic passive aggressive maneuvers as they sit across from each other, executive assistants to co-CEOs of a publishing company. Lucy can’t understand Joshua’s joyless, uptight, meticulous approach to his job. Joshua is clearly baffled by Lucy’s overly bright clothes, quirkiness, and Pollyanna attitude.

Now up for the same promotion, their battle of wills has come to a head and Lucy refuses to back down when their latest game could cost her her dream job…But the tension between Lucy and Joshua has also reached its boiling point, and Lucy is discovering that maybe she doesn’t hate Joshua. And maybe, he doesn’t hate her either. Or maybe this is just another game.
(Goodreads)

I am a sucker for hate-to-love storylines. Since figuring that out I have been scouting for more books of this category and The Hating Game is by far one of the best I’ve read.

It’s quite obvious that our two main characters has a clear distaste (putting it mildly) for each other and that is not easy when you work literally opposite each other. Their weird mirror game they’ve got going on is quite fun and very strange to witness and we go on an emotional roller coaster ride throughout the book as Lucy slowly opens up her mind to the possibility that pure undiluted hatred might not be the only thing she feels towards Joshua.

When they are at the paintball course as a part of a company excursion and what happens later that day when Lucy suddenly succumbs to the flu was one of my favourite parts of the book. Lucy and Joshua’s interaction and how he so caringly takes care of her. I was LIVING for it!

These slow-building romances are one of my favourite kinds of romances to witness, where your own anticipation builds up before it finally explodes in brilliant fireworks.
That’s what this book did to me. I was turning the pages, eyes darting from left to right, down each page, waiting for the moment to happen. And, I don’t think it’s a spoiler to say that when it did happen – fireworks!

The writing is easy to read and effortlessly humorous, and I applaud Sally Thorne for creating such a brilliant gem of a book and being her first book as well! The characters were well-fleshed out with depth to them and I felt that bond with them when you know you’re invested in a story. That doesn’t always happen, which is a great shame, but when it does, it all just flows that much easier.

I enjoyed reading about these characters, especially Joshua and what is revealed later on about him and his feelings. I just wanted to hug him and kiss him all over and… yeah let’s not go there.

A fantastic romantic book that grips you from the beginning and holds on to you until the very last page has been turned.

Do I recommend this book?
Yes. Absolutely. Start reading it now!

To whom?
To ANY romance fans and suckers for Hate-to-Love storylines!

Have you read The Hating Game? Do you own it, but simply haven’t read it yet? Let’s chat about it in the comments.

3 thoughts on “Review – The Hating Game”

What reading plans do you have for the weekend? 📖
Happy #shelfiesunday Bookstagram
What is your reading goal for 2021? 📚
📚 Boganmeldelse 📚
Anyone else just impatiently waiting for April and for the Shadow and Bone Netflix show to come to life? 😁
Anyone else remember hearing that someone was making a ToG TV series? 🤷‍♀️