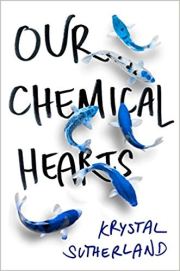 Henry Page has never been in love. He fancies himself a hopeless romantic, but the slo-mo, heart palpitating, can’t-eat-can’t-sleep kind of love that he’s been hoping for just hasn’t been in the cards for him-at least not yet. Instead, he’s been happy to focus on his grades, on getting into a semi-decent college and finally becoming editor of his school newspaper. Then Grace Town walks into his first period class on the third Tuesday of senior year and he knows everything’s about to change.

Grace isn’t who Henry pictured as his dream girl-she walks with a cane, wears oversized boys’ clothes, and rarely seems to shower. But when Grace and Henry are both chosen to edit the school paper, he quickly finds himself falling for her. It’s obvious there’s something broken about Grace, but it seems to make her even more beautiful to Henry, and he wants nothing more than to help her put the pieces back together again. And yet, this isn’t your average story of boy meets girl. Krystal Sutherland’s brilliant debut is equal parts wit and heartbreak, a potent reminder of the bittersweet bliss that is first love.
(Goodreads)

Our Chemical Hearts isn’t just your average YA contemporary. It deals with a lot more heavier subjects than popularity and fitting in. It deals with love and loss, with suffering and pain and that not everything is bound to have a good ending. And that is one of the reasons it really gripped me. Krystal Sutherland was not afraid to go against the happily ever after and I like that, especially with contemporaries. The story doesn’t need to be dragged out throughout several books, but can be short and bittersweet.

Henry Page meets the new girl, Grace, who is peculiar and not like any other girl he’s ever met. She walks with a cane, has weird habits and you turn the pages in hope of learning just a little bit more of her backstory. Of why Grace is how she is. And it is slowly unveiled throughout the story and it’s not pretty. It’s sad and borderline depressing, but you still root for them.

I will say, plot wise, it isn’t the fastest moving storyline, but with just over 300 pages it’s a relatively short book that you’ll get through quickly and just left with the thoughts churning inside your head.

As of characters – Henry is pretty straight forward. I highly enjoyed the comical aspect of his parents, even laughing out loud a few times despite the overall darker tone of the book, but Henry himself is basically your average hopeless romantic teenage boy.

Grace Town is a conflicted young girl, dealing with past events that makes it hard for her to live the normal life she once had. She’s very confusing at times, with mood swings, switches between hot and cold constantly and Henry doesn’t really know where he has her, and neither do we, the reader.

So, all in all, this book is heavy and heartfelt, but a truly gorgeous story that defies the average meet cute YA contemporary.

Do I recommend this book?
Yes, I think it’ll do lots of people good to read this story.

To whom?
To those wanting a change of pace in contemporary stories, that’s more realistic and raw.

What reading plans do you have for the weekend? 📖
Happy #shelfiesunday Bookstagram
What is your reading goal for 2021? 📚
📚 Boganmeldelse 📚
Anyone else just impatiently waiting for April and for the Shadow and Bone Netflix show to come to life? 😁
Anyone else remember hearing that someone was making a ToG TV series? 🤷‍♀️