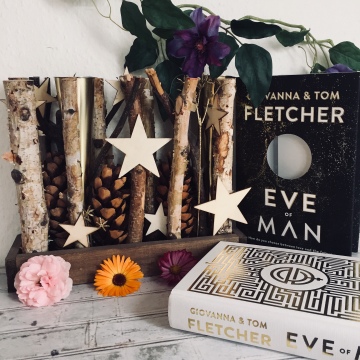 First off – I’m a huge fan of both Tom and Gi, together as a family and respectively with all they’ve done in their professional careers. So of course, when they shared the news of having co-written a YA book, I had to have it. Because how could this go wrong – Tom is an award-winning children’s author and Giovanna has written several new adult books. So they met in the middle and created a fantastic YA setting with a great premise.

And here’s the deal. The premise is pretty straight forward (and then again it isn’t).

No girls have been born for fifty years.

Mankind is hanging in the balance.

Then SHE is born – and against all odds, she survives.

The saviour of humanity.

They called her Eve.

So that’s basically all I knew going into this story. And I liked not knowing too much.

It immediately drew me in with Eve growing up in a giant tower (almost think the tower from The Thousandth Floor). People are living here, with Eve stowed away nice and safe at the very top, with no idea about what is happening out in the real world. Because Eve is growing up in a bubble made up of steel and technology.

Then there’s Bram – he’s a young pilot, but he doesn’t fly airplanes. He is the pilot of the most realistic hologram ever seen, Holly – Eve’s best friend. He’s grown up with Eve without never having met her, but of course, that’s all about to change when shit hits the fan.

And then we slowly get the feeling that not everything is as dandy as we thought it was up in that tower.

What a great and original story Tom and Gi have created for us. The P.O.V changes between Eve (Gi) and Bram (Tom) and it’s brilliant that they have written different perspectives, because it makes the voices of the characters that much more distinctive. You can really tell they are two different people.

So we are dumped into this futuristic, classic dystopian society where things have really taken a turn for the worse and the scientists in the tower is really controlling everything.

Throw in some action, forbidden love, shocking twists and turns and a brewing rebellion and you’ve got yourself Eve of Man – the first book in a thrilling trilogy written by two brilliant writers.

I loved reading this story and the ending was the perfect set-up for the sequel, which I know I’ll hate waiting around for. But alas. That’s what you do and the better the book, the worse the wait.

And this wait will be hell.

So do I recommend this book?
YES! YESYESYESYES!

To whom?
To fans of YA dystopian stories that takes you on a rollercoaster ride.

One thought on “Review – Eve of Man”